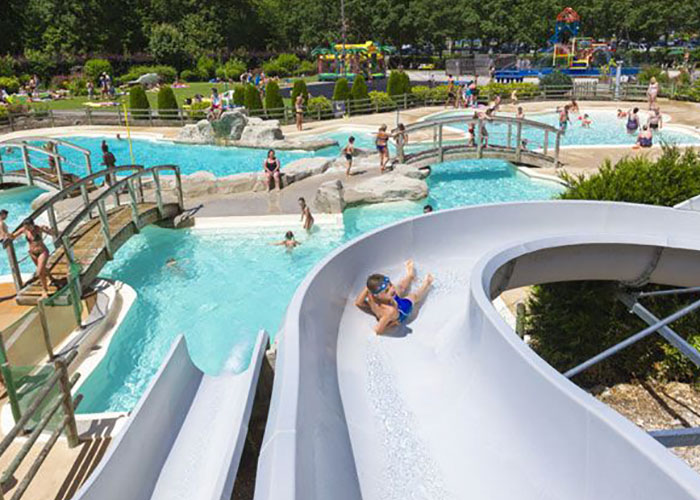 Jura is one of France’s smaller regions – squeezed in between Alsace, the Swiss border and Burgundy. It’s also one of the more undiscovered regions, even for the French, meaning that if it’s a quiet and undisturbed holiday you’re looking for, it’s a perfect choice.

Jura has no big industrial cities but instead boasts rural medieval hamlets, pretty market towns, vineyards and dramatic Alpine scenery. Here you’ll find dense forests, lakes and mountains that are still very much off the beaten track. It’s a stunning area to explore.

Things to do while you’re camping in Jura

The Jura’s economy essentially revolves around producing outstanding cheese and wine. The market towns of Arbois and Poligny are the food capitals of the region and here you can visit a traditional fruitière – a co-operative for making wine and cheese. In the centre of Lons-le-Saunier, capital of the Jura, you’ll find La Maison de la Vache Qui Rit. Children will love this modern, interactive museum, which is dedicated to the Laughing Cow – France’s most famous processed cheese. Near Salins-les-Bains you’ll find the Unesco listed Les Salines de Salins – a maze of vast underground caverns and galleries, where salt was mined for 1,200 years.

Jura is also a wonderful location to spend some time in the great outdoors. The Grandes Traversées du Jura is 300km of trails that can be followed on foot, horseback and mountain bike in spring and summer, or on cross-country skis in winter. The Jura also has its own lake district in the Petite Montagne nature reserve, where you can swim, fish and ramble to your heart’s content. Within an hour’s drive are the 60 metre high Hérisson waterfalls and the sandy beaches of Lac de Chalain.

Besançon is another Unesco World Heritage Site, with beautiful historic buildings including the cathedral, palace and museums. Or for something completely different, take a visit to Préhisto-Parc at Réclère and enter the lost world of the dinosaur. You can combine your visit with a trip to the caves of Réclère, situated just below the park. Animal fans will enjoy the Jurafaune Animal Park, with birds of prey, lynx and other rescued wild animals.

You’ll benefit from having a car to explore the region and driving to Jura from the UK via the Eurotunnel is around a 9 and a half hour journey. Alternatively, take a cheap flight with Easyjet, Flybe or British Airways to Lyon or Geneva and hire a car.

Situated on the southern banks of Lac de Chalain, Domaine de Chalain is a large and lively site set on a backdrop of steep hills. There's an amazing pool complex, with outdoor and indoor pools, water slides, waterfalls and rapids or you can visit the lake to hire a pedalo or canoe before enjoying a cooling swim. Lake fishing is also on offer. The facilities at the campsite are extensive, with a playground, boules, table tennis, tennis courts, archery, a basketball court, mini golf course, a treetop adventure park and horse riding all on offer.