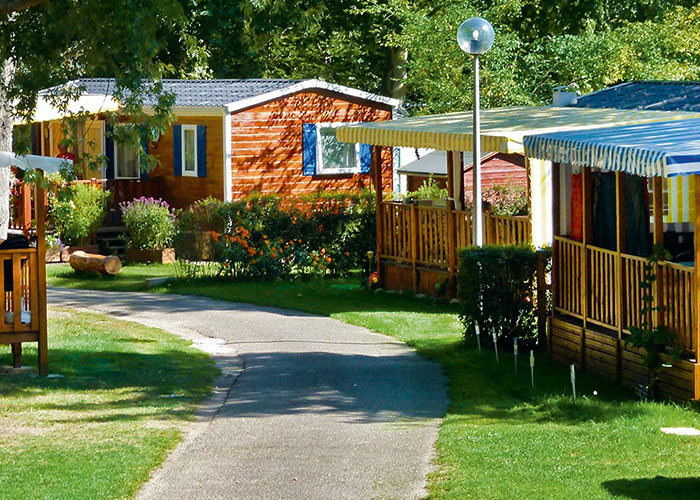 Lying on the west bank of the Rhine River, between the Rhine and the Vosges mountains, Alsace is the Germanic region of France, the perfect location for a family camping holiday. It shares borders with both Germany and Switzerland and to this day a large proportion of the population speak or understand Alsacian (a dialectal form of German).

In the last two centuries, Alsace has passed from Germany to France several times and the Germanic influence can be clearly seen in the region’s heritage and culture. Villages are full of brightly painted steep-roofed half-timbered houses, firmly established as the local Alsatian style. Alsace is made up of two ‘departments’ – the Lower Rhine (Bas Rhin – capital Strasbourg) and the Upper Rhine (Haut Rhin – capital Colmar).

Things to do while you’re camping in Alsace

There is plenty on offer on a camping holiday to Alsace.

Strasbourg, with its magnificent gothic cathedral and historic centre, is one of the most visited cities in France. One of the two seats of the European parliament, the highlight of the city’s year is undoubtedly the annual Christmas Market. The Petit France quarter, on the banks of the River Ill, is particularly worth a visit. Strasbourg has a petting zoo, which is ideal for the kids. And nearby is the Parc des Cigognes (a sanctuary for the regional animals of Alsace), The Montagne des Signes (a conservation centre for Barbary Macaque monkeys) and the Volerie des Aigles (a bird of prey sanctuary).

Although Colmar is the capital of Haut Rhin, the department’s biggest city is Mulhouse. A major manufacturing centre, Mulhouse is home to the French National Railway Museum and the Cité de l’Automobile, an impressive car museum that houses the world’s largest collection of Bugattis. There’s also a large open-air museum – the Ecomusé d’Alsace. Mulhouse also has a zoo! And, if you’re there at the end of July or beginning of August you can check out the Kermesse. This is a county fair with rides, food and all sorts of things to do.

Only 45km from Mulhouse is Lac de Kruth – the largest lake in Southern Alsace. Here the kids can hire paddleboats, go swimming or diving and try their hand at fishing and hiking.

Alsace is famous for its wines, and wine production is one of the region’s main activities with vineyards located on the eastern slopes at the foot of the Vosges. Other regional specialities include beer, sauerkraut, Alsatian gingerbread (known as Pain d’Epices) and Flammekueche – a traditional dish similar to a pizza without tomatoes, and covered with cheese, cream, mushrooms and local ham.

The region’s main airport is Basel-Mulhouse, served by airlines including BA, Swiss, Lufthansa and Easyjet. There is also a smaller airport at Strasbourg. The TGV train departs from either Paris or Lyon and Alsace can also be reached by motorway via Nancy and / or Luxembourg.

Camping Les Sources is a large terraced campsite set in 15 acres of woodland and in the heart of Alsace. Kids will love the pool complex, with a covered swimming pool as well as an outdoor pool. There is a children's club in August and an extensive entertainment programme for all ages. Sports amenities include tennis, volleyball and mini golf and there's a bar and restaurant where you can sample authentic regional specialities.

Book this campsite with the following retailers

Find the best holiday destinations, discount codes & offers and useful information for your next family
holiday with the kids.